The truth is, when it comes to international tourists, the Philippines does not enjoy the same dizzying figures as our neighbors Thailand and Vietnam. Part of the reason is that we are a bit isolated from the main Southeast Asian peninsula. We are on the “wrong side of the South Chine Sea,” they say. It takes more money and effort to get here. Also, we’re just not as well-known.

Here at PhilippineBeaches.org, we chat with foreign travelers (mostly bloggers) about their stay in the Philippines in hopes of making them examples and showing the world that the Philippines is a fantastic destination for international tourists. We have talked to eight of them so far. One of the questions we usually ask is somewhere along the lines of: “What is that one thing about the Philippines that surprised you?”

Good and bad, here’s what we have gathered.

Special thanks to Sabrina Iovino for the cover photo. Follow her on a trip around the world at Just One Way Ticket!

“Absolutely stunning!” British tourist Amanda Flynn exclaimed. We met her in Port Barton in 2013 during her backpacking trip around Palawan.

“The Philippines has the most beautiful beaches in the world in my perspective. It’s not hard to find a good one. whenever I showed my friends from home photos of Philippine beaches, they can’t believe that this is real.”
– Sabrina Iovino, Just One Way Ticket

6. The Philippines is not touristy! At least, not yet.

#LaBoracay has forever ingrained in our brains images of tourist hordes squeezing their way around the country’s most famous island destination. But outside Boracay, much of what the Philippines has to offer remains almost secluded and untouched by foreign travelers.

“I thought that it would be less developed than Thailand, and in some ways I feel it is. I was there during low season and for that I am grateful. I kind of don’t want others knowing how beautiful it is, because I don’t want it to get overpopulated with tourists!”
– Amanda Flynn

5. The Philippines is not as cheap as its neighbors.

By Western and first-world standards, the Philippines is a cheap destination. But when you compare it to its neighbors, it still is relatively costly.

For example, accommodations for less than 200 Baht (roughly 270 pesos) a night are not uncommon in Thailand, but that’s extremely tough (though not impossible) to find in the Philippines. The concept of hostels, homestays and other cheap forms of lodging are yet to be embraced fully, although it is beginning to develop.

“I heard the Philippines is a cheap country but I didn’t find it that cheap.”
– Alexandra Kovacova, Crazy Sexy Fun Traveler

“It was more expensive than I thought it would be even during low season. But maybe that’s because for some reason i was comparing it to prices in China.”
– Amanda Flynn

4. The Philippines is so Westernized.

Steph of 20 Years Hence shares, “The Philippines is the one country where you can be an American with pride. Tony (her husband and co-blogger) is used to people giving him grief for coming from the U.S., so we did not expect Filipinos to get so excited to find out he was from the United States and to look so fondly on the country.”

“What surprises me the most was that really everybody speaks English and the American Influence.”
– Sabrina Iovino, Just One Way Ticket

But the strong American influence isn’t the only thing that catches visitors off guard. Bastiaan Blikman was astonished by the Spanish imprints. 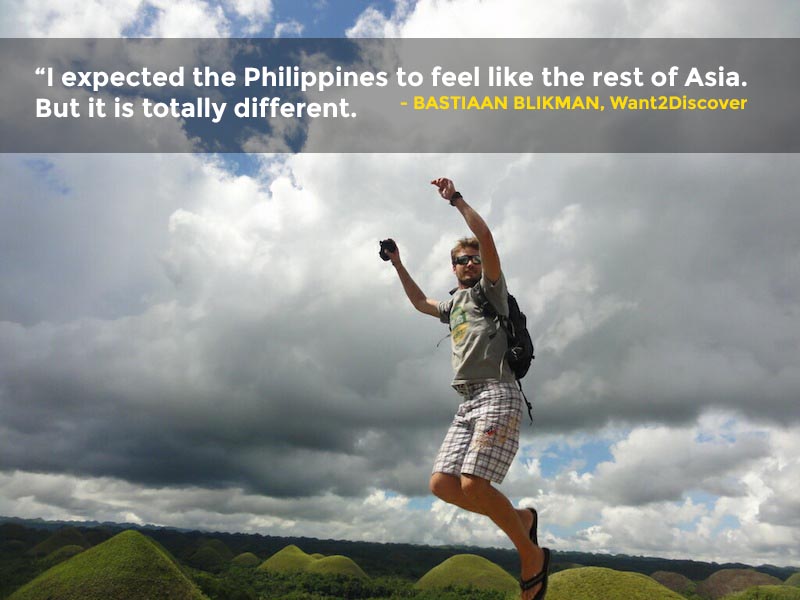 “I expected the Philippines to feel like the rest of Asia, but it is totally different. To me it felt more like South America. This probably is related to the Spanish colonization and religion.”
– Bastiaan Blikman, Want 2 Discover

When it comes to language barrier, there is little to none. English is widely spoken even in the remote provinces, so communicating is not a problem. Signs and labels are often in English, too.

“We were surprised to find out that English is so widely spoken and is actually an official language. We weren’t expecting that at all.”
– Steph, 20 Years Hence

“I thought I would have trouble communicating with locals. I didn’t realize everyone spoke English.”
– Amanda Flynn

“I was really surprised that everybody spoke English. In the rest of Asia, it’s really hard to find people that speak English well.”
– Bastiaan Blikman, Want2Discover

“It’s over six years ago when I first visited (the Philippines). I remember that I didn’t know people speak good English. I wasn’t aware of the American cultural influence.”
– Jasper Ribbers, The Traveling Dutchman

Filipinos are a naturally happy people. We are hospitable, sometimes giving guests more than what we can afford. Our families come first. And we smile a lot, even during the toughest of conditions. 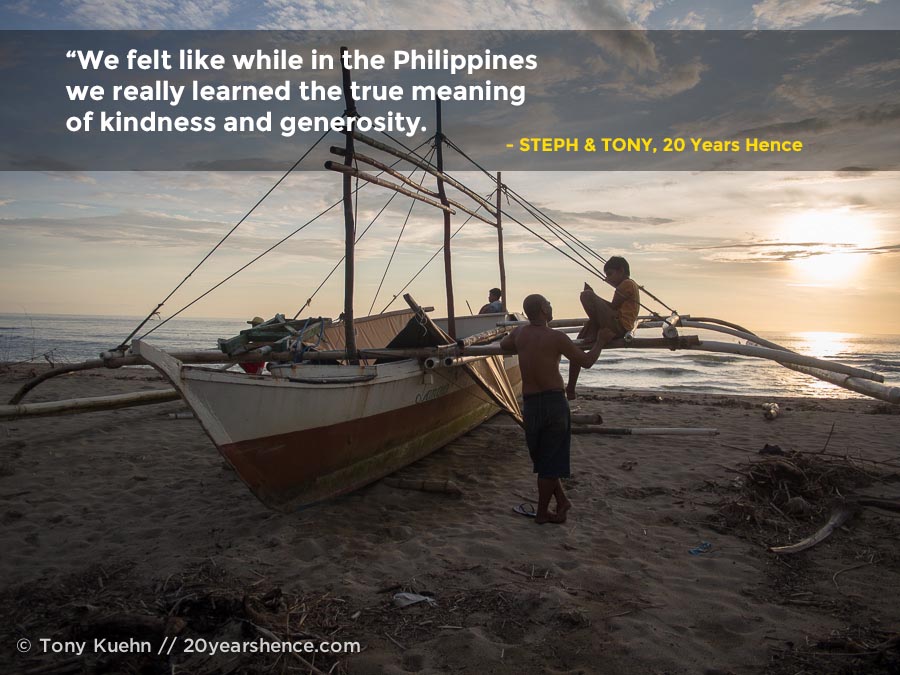 “From Manila down to Mindanao, everywhere we went, people were so helpful and friendly, we felt like while in the Philippines we really learned the true meaning of kindness and generosity.”
– Steph, 20 Years Hence

“Something else that surprised was the natural happiness of people. I already thought people were kind in Thailand and Indonesia, but the Filipino people are the friendliest of all!”
– Bastiaan Blikman, Want 2 Discover

“The family and community spirit is incredibly strong. You can feel it everywhere. Even the big cities have a bit of small town charm to them.”
– Brendan Lee, Bren on the Road

International media mentions the Philippines only when there’s a natural calamity hitting the country or when the otherwise peaceful islands off the southern tip of Mindanao are rattled by terrorism or military clash. No wonder many tourists see the country as unsafe even when it affects only a small area. 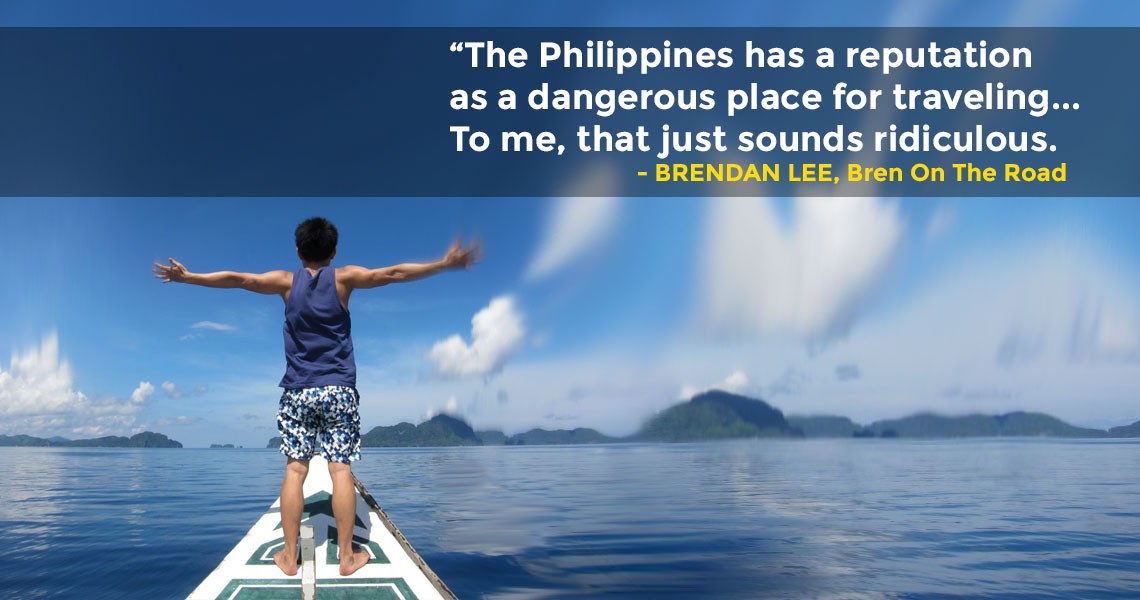 “One thing that I think is the worst misconception is the safety. Because of the media coverage of the troubles in the south, a lot of people seem to think it’s dangerous everywhere. It’s really a sad thing, in my opinion.”
– Jasper Ribbers, The Traveling Dutchman

“How safe the country is. Manila is a large city, so it has crime like all big cities, but outside of Manila I’ve never felt that I had to be on guard or worried about my safety.”
– Matt Gibson, Matt-Gibson.org

“Before I went my parents were anxious about me going. Like many people they had heard stories about crime, terrorism and natural disasters in the Philippines. This also made me a bit anxious about visiting the Philippines. But it turned to be the best experience I ever had in a country.”
– Bastiaan Blikman, Want2Discover

“I was also a bit anxious before I came the first time in terms of safety. Now 5 years later, I can say that I fell totally safe in the Philippines. In fact it became my second home. I never had any problems in the Philippines; never got robbed or mugged.”
– Sabrina Iovino, Just One Way Ticket

“I remember being in Hong Kong and going to their airport website. The Philippines was on the tiny list of ‘DON’T GO TO’ countries…right next to Syria! I think there was an incident with tourists from Hong Kong around that time, so the sense of danger was so high! Just an isolated case, though. I haven’t been to Davao, but I hear a lot of people worrying about my safety if I go there, also. I think it’s mostly Filipinos that say that, though. All the foreigners that I know that have gone there said it was totally safe – and completely beautiful!”
– Nathan Allen, I Dreamed of This

“We were also really surprised at how safe we felt during our entire visit, even in Manila. Outside of the country, all you tend to hear about the Philippines are the natural disasters or how unsafe places like Manila are, but we legitimately never felt at risk (not even when we may have accidentally stayed in a brothel while in Manila…).”
– Steph, 20 Years Hence

“The country has a reputation as a dangerous place for traveling. You might be surprised to know the New Zealand government currently has The Philippines listed as ‘extreme risk’ for travelers. To me that just sounds ridiculous. Granted, they know things that I don’t, so my judgment is limited. But just from my experience, I feel much more in danger walking around at night in Auckland on Friday night than I do in Manila.”
– Brendan Lee, Bren on the Road

“I was shocked how cheap a bottle of rhum is. I mean, less than a dollar? – Sabrina