They considered coming to the Philippines a “gamble.” They did not know much about the country.

“We arrived in the Philippines with no expectations,” shares Steph, one-half of the travel blog 20 Years Hence. With husband Tony, she forms the wordsmith-lensman duo who has been capturing and then reliving their most unforgettable travels through their website, a place in the web that is brimming with information and inspiration.

Upon setting foot in Manila, they were sure of one thing: they would spend all the allotted 21 days that they were allowed for free upon arrival in the country. They did. But it didn’t take them very long to realize that 21 days wouldn’t be enough. “We wound up extending our visa so that we could spend a full two months. In the end, we spent 57 days in the Philippines… and it still wasn’t enough!”

1. Before coming to the Philippines, what were your expectations?

To be honest, we didn’t know very much about the Philippines before we arrived, so we didn’t really have any expectations. Based on what we had heard, we were expecting to encounter some really beautiful beaches and to find the capital city, Manila, sleazy and scary. In reality, only one of those expectations proved true!

2. What are the destinations you visited?

During our time, we visited: Bohol, Negros Island (Dumaguete, Apo Island, Bacolod, and Sugar Beach), Mindanao (Cagayan de Oro and Camiguin), Palawan (Puerto Princessa, El Nido, and Port Barton), and Luzon (Manila). We also spent a night in Cebu, but we didn’t really explore and didn’t see much apart from our hotel room as we had an early flight the next day! 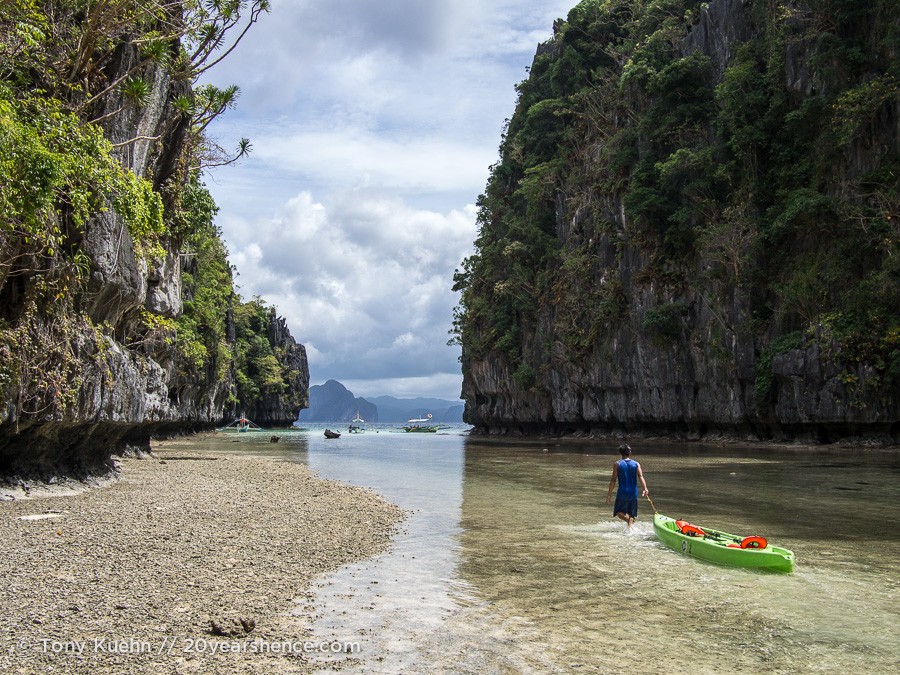 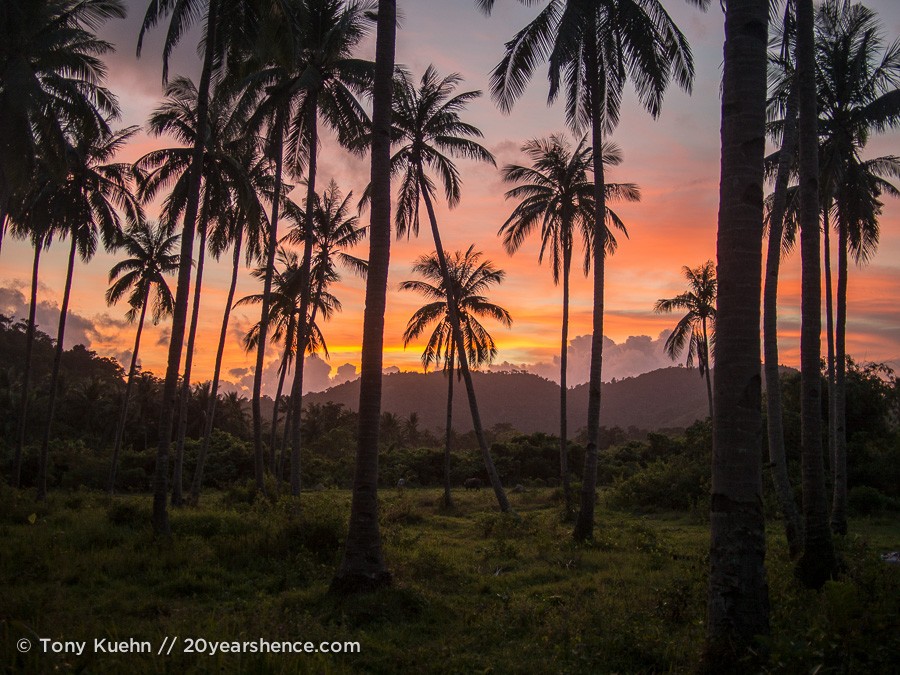 3. Of all these destinations, which one is your absolute favorite?

This is so hard because we legitimately enjoyed everywhere we visited in the Philippines! But if we really had to pick, we’d have to say Apo Island — it’s where we learned to SCUBA dive and the people there made us feel like family. Due to the dedicated conservation efforts, there’s a healthy sea turtle population there and the reefs are in excellent condition (we still consider it to be one of the most beautiful places we have ever dived!); it’s a really wonderful example of conservation and sustainable tourism done right. Even though it’s a tiny place with not much to do and electricity that only runs from 6:00pm – 9:30pm, we just fell in love and found it hard to leave. 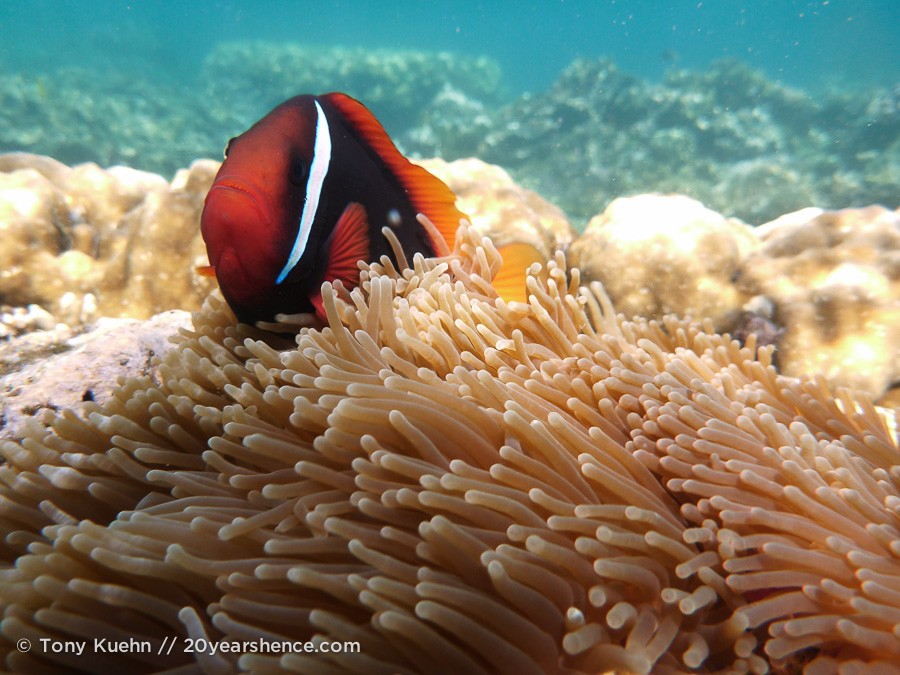 4. What was your first day in the Philippines like? What were your first impressions?

Our first day in the Philippines was rather epic! Even before we boarded our flight, we were pretty excited because the flight attendant kept referring to Tony as “Sir Anthony” which made him feel like royalty. We caught a red-eye flight from Shanghai that touched down in Manila, and then caught a connection to Cebu. From there we needed to get to the ferry terminal so that we could catch the boat to Tagbilaran on Bohol.

Going through immigration in Manila, we were immediately impressed by just how friendly everyone was—everyone greeted us with warm smiles, and coming from China, it was such a relief that everyone spoke English. Then when we reached Cebu, we were so surprised when we asked someone about how to get to the ferry and they told us the secret of going upstairs to the departures level where the taxis were a fraction of the price! Everyone we met was so genuine, friendly, and helpful, we were immediately bowled over by the Filipino hospitality.

On the way to the ferry terminal in Cebu, we were both struck by how alive the city felt, and how much color there was surrounding us. And yes, again, how much English (and Taglish!) was on the billboards and signs.

After catching a trike down to Alona Beach on Bohol, we broke out into laughter as we strolled along the beach, blown away by how beautiful it was and just how colorful and lush the island was. We felt so happy and carefree, a feeling that never left us for the 2 months of our stay!

5. What are the things that you are surprised to learn about the Philippines during your stay?

Well, obviously we were surprised to find out that English is so widely spoken and is actually an official language. We weren’t expecting that at all.

We were also really surprised at how safe we felt during our entire visit, even in Manila. Outside of the country, all you tend to hear about the Philippines are the natural disasters or how unsafe places like Manila are, but we legitimately never felt at risk (not even when we may have accidentally stayed in a brothel while in Manila…). From Manila down to Mindanao, everywhere we went, people were so helpful and friendly, we felt like while in the Philippines we really learned the true meaning of kindness and generosity.

Also, we have to admit, the Philippines is the one country where you can be an American with pride. Tony is used to people giving him grief for coming from the U.S., so we did not expect Filipinos to get so excited to find out he was from the United States and to look so fondly on the country. It was certainly a welcome change!

6. What is that one memory in PH that you are fondest of?

We have a lot of really great memories from the Philippines, but apart from diving, the memory that we most hold dear is making a new friend, Apocalypse, while on El Nido. Apo was the captain of the boat we used for island hopping around the Bacuit archipelago and when he found out that our next stop was Port Barton, he told us we could charter his boat and travel by sea rather than bus. We took him up on his offer and on the first day of our journey he offered to take us to an area that most tourists never go to. We had no set schedule so we agreed and that is how we wound up in Banbanan, a tiny little fishing village, to which we were the 9th and 10th foreign visitors and the place Apo originally called home. We got to meet his family, who treated us to some excellent home cooking and trekked through the jungle to an amazing swimming hole, and just got to soak up the everyday life of the village. We slept under a mosquito net on a picnic table that evening, with Apo right beside us, and woke up to the most spectacular sunrise.

Banbanan was a special place, not because so few people ever see it for themselves, but because the people there were so beautiful. We will always consider ourselves lucky that we met Apo and got to spend time with him and his family who took such good care of us. 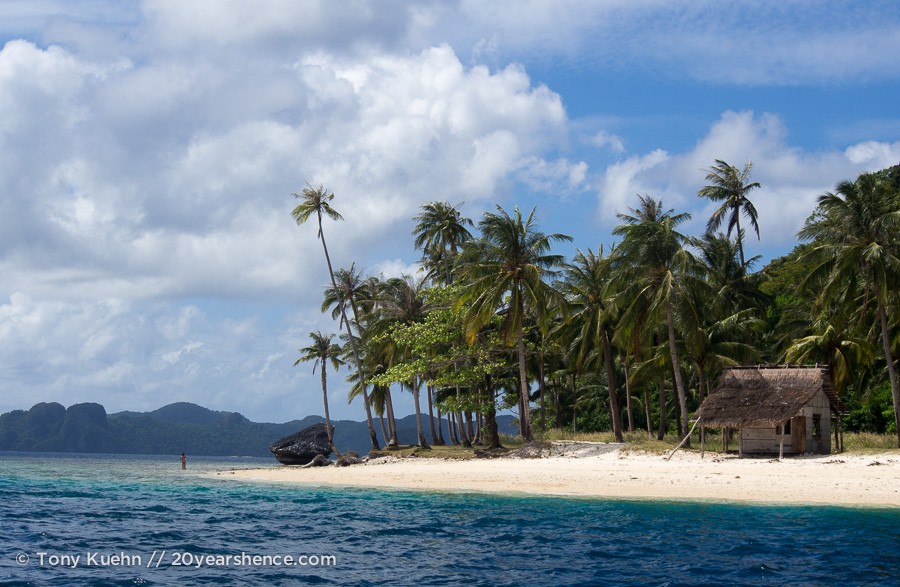 7. What are the things that Philippine tourism authorities need to improve on? Any pet peeves?

The Philippines is a beautiful country, but sometimes we felt disappointed or distressed by how little effort is made to protect and preserve the country’s natural resources. In Bohol, for instance, several of the beaches we visited were littered with trash, a problem that, unfortunately, is seen throughout most of Asia.

Perhaps more alarming is when we visited protected marine sanctuaries and were not asked to pay a fee and we witnessed boats carelessly throwing their anchors overboard, doubtlessly damaging the precious coral below. Also, while diving in El Nido, we heard the sounds of dynamite fishing, a terrible practice that is so destructive and should not be occurring in marine conservations. We understand that many Filipinos rely on fishing as their primary source of income and we don’t begrudge them that, but more of an effort needs to be made to ensure that protected areas are actually protected and to educate the local population about how to respect the environment so that it is here for everyone to enjoy for years to come. If you cyanide fish, not only do you kill off the local marine life (including those in the protected zones), but eventually the fishermen and the dive/snorkel operators will be out of jobs because they will have destroyed their greatest asset. 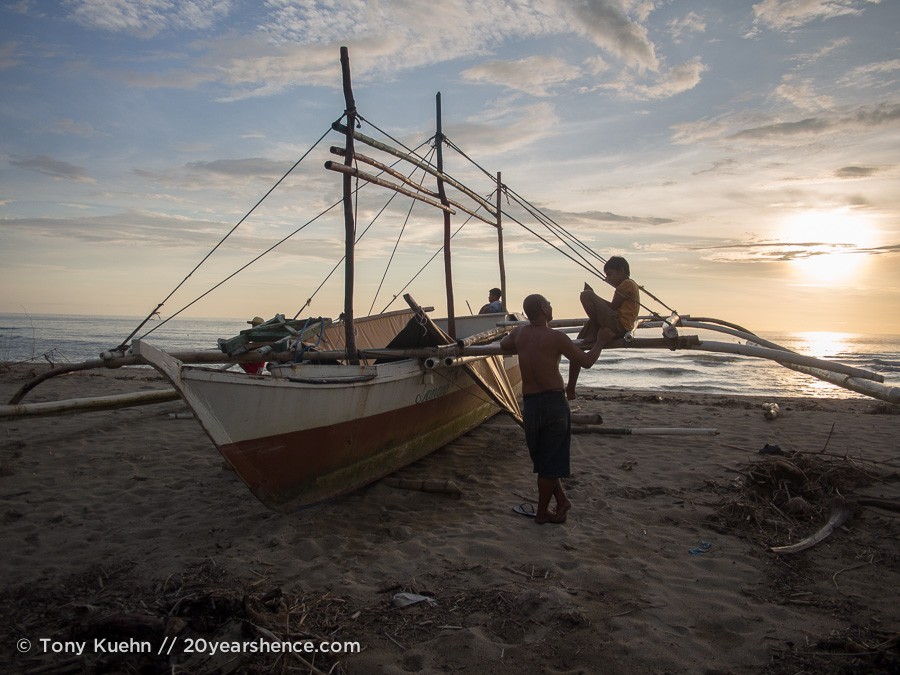 8. Are you planning a return trip to PH? If so, which destinations are you eyeing this time around?

We left the Philippines knowing that we would be back again someday because there is so much more to the country that we want to explore; we probably have enough places on our list for a lifetime of visits! Unfortunately, we don’t have any immediate trips planned, but when we do return (and you can be certain we will), we would love to visit northern Luzon to see the famous rice terraces as well as places like Vigan, and of course, we want to visit Donsol and Anilao for diving. We’d also like to visit Leyte, Malapascua, and Siquijor, and one day, we’d love to make it all the way up to Batanes for something truly unique! We’re hoping that we’ll have the chance to dive into the incredible Tubbataha Reef someday… Really the list goes on and on and on! We even want to go back to Manila so we can explore it some more! 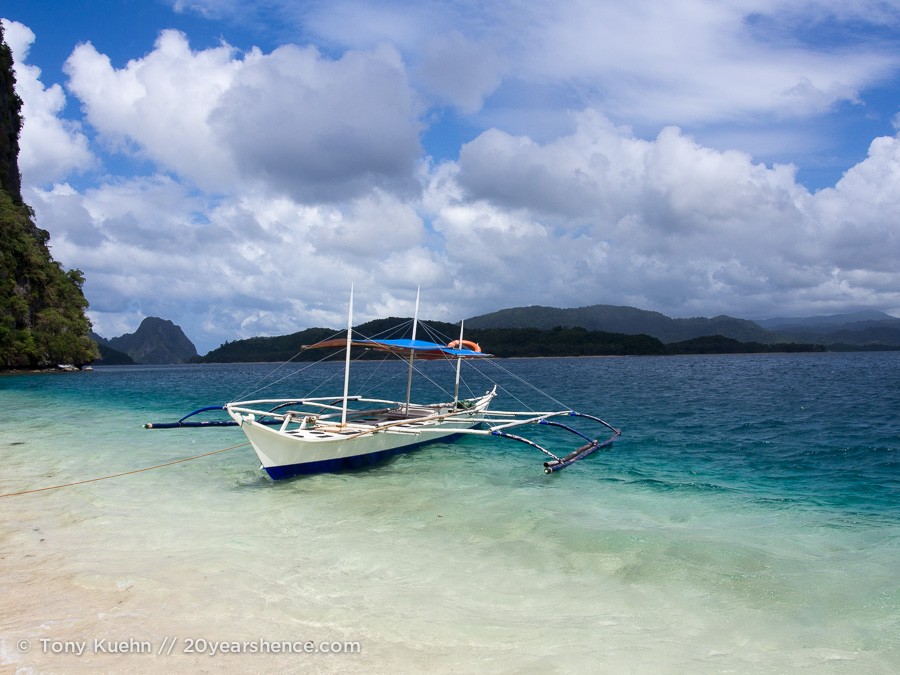 9. Any tips for those planning to visit the Philippines?

Filipinos are honestly some of the friendliest, most welcoming people you will ever meet. The beaches are beautiful and the countryside is stunning, but it is the people who will really make your trip wonderful. So take the time to get to know the locals, and put aside any stories you have heard of the country being unsafe.

Also, pack earplugs! You’ll want them since this is a nation that loves its karaoke and its roosters, and both have a habit of keeping you up when you’d rather be sleeping.

Finally, as gorgeous as the destinations are, part of what makes the Philippines such a rewarding place is the lack of development. This means many of the places you visit will be untouched, but it also means that getting there often takes a loooooong time. But that’s just part of the adventure, so relax and enjoy the journey. 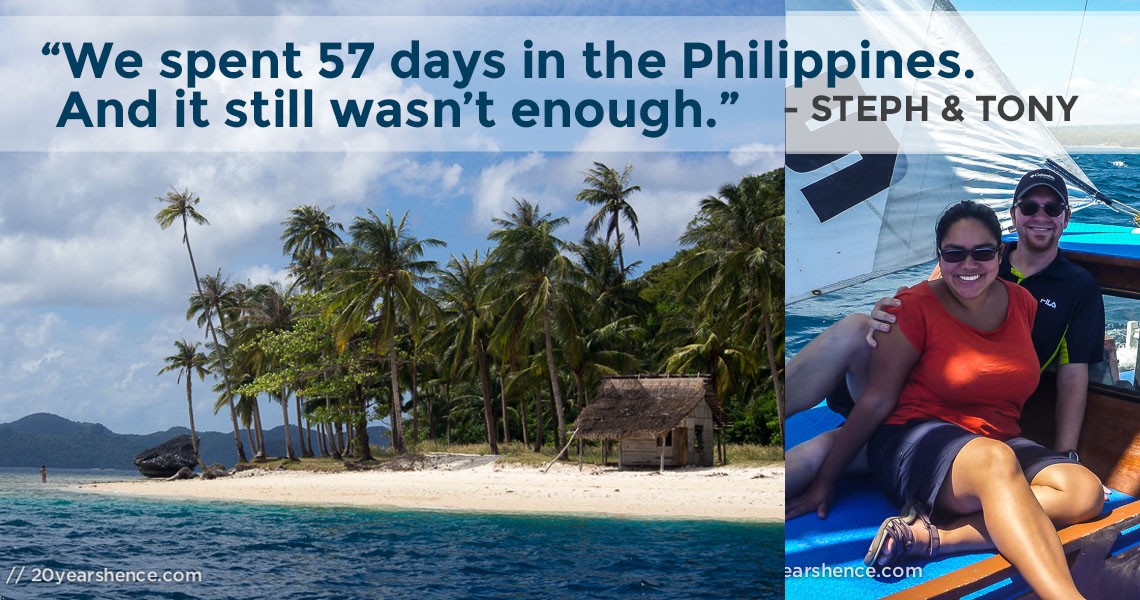 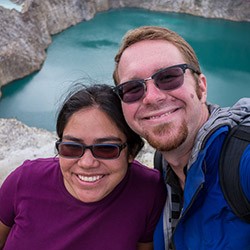 Steph and Tony are a writer-photographer duo who have been living their dream and traveling the world. The Philippines was their fourth stop since they hit the road in August 2012. They document the many wonderful and not-so-wonderful places and encounters along the way on their travel blog 20 Years Hence.