Dubbed as the Summer Capital of the Philippines, Baguio is one of the destinations in the country frequented by tourists because of its cooler climate. Its cool temperature is attributed to its location which is 1,540 meters above sea level in Luzon’s tropical pine forests ecoregion. It is the reason why Baguio is also known as the City of Pines.

Baguio is a highly urbanized city and the economic center of the Cordillera Administrative Region. It was built as a hill station at the beginning of the American Colonial Period in 1900. In 1903, Kennon Road was built and became the first road that connected the city to the provinces of Pangasinan and La Union. During the same year, Camp John Hay was constructed while the rest of the city was planned out in 1904 by Architect Daniel Burnham.

Today, Baguio is among the top tourist destinations in the country with many attractions like Burnham Park, Minesview Park, and Botanical Garden. From Baguio, you could also easily visit attractions in La Trinidad.

ATTENTION! Don’t forget to accomplish all the requirements prior to your visit. Check the official websites or Facebook pages of Cordillera Tourism and Baguio Tourism for updates and announcements. Read more about Baguio’s new normal travel policies and requirements here: BAGUIO TRAVEL REQUIREMENTS!

If you picture Baguio on the map, Burnham Park is at the center of the city. A lot of attractions and other places of interest are somewhat surrounding it. Jeepney terminals are near the park and most key roads are connected to it too. So if it’s your first time visiting Baguio and you want to see most of the attractions in the city, it is best to book accommodation near Burnham Park. But if you want some peace and quiet, you should book a hotel far from Burnham Park.

There are many accommodation options in Baguio, but here are the top-rated hotels in the city.

NOTE: This section is a work in progress. Due to the pandemic, changes may have occurred. Please contact the LGU, terminal, or bus company directly for the latest schedule, routes, and fares.

Depending on which part of Manila you’re coming from, Baguio is usually four to six hours away. The travel time also depends on which route the bus takes and whether it would make a stop along the way.

There are several bus companies that have routes from Manila to Baguio. There are also regular buses and high-end buses like JoyBus and Victory Liner’s first-class service. The first-class buses have wider legroom and free snacks. They also have a shorter travel time of 4-5 hours since they take NLEX, SCTEX, and TPLEX non-stop. The regular buses usually take Dau Exit (NLEX) or Conception Exit (SCTEX) and make at least one stop.

Here are the fares for the different buses:

ATTENTION! Because of the pandemic, the opening hours and rates might change from time to time. Make sure you check the official websites or Facebook pages of the attractions and tourist spots prior to your trip.

Camp John Hay was established in October 1903 as a rest & recreation station for the US Armed Forces in the Philippines. During World War II, the Japanese bombed the camp, eventually becoming the headquarters of General Tomoyuki Yamashita. After the war, Camp John Hay returned to the hands of the Americans until it was turned over to the Philippine government. Today, it is now both a tourist destination and a forest watershed reservation in Baguio.

Among the things you can do here are:

Mines View Park is named such because it has a view of the gold and copper mines of Itogon below. You can also get a fantastic view of the sunrise from the viewpoint. And around the park are lots of souvenir shops.

One of Baguio’s well-known attractions, Burnham Park has a lot of activities that can be enjoyed by different types of travelers, especially those who are with their families. It also has several smaller places of interest like the Melvin Jones Grandstand, Orchidarium, and Children’s playground. You can rent a bike or go-kart to go around the park. There are also swan boats that you can rent along the Burnham Lagoon.

Another popular tourist spot in Baguio is Botanical Garden. Located along Leonard Wood Road, it is a spot where you can be surrounded by greenery not too far from the city center. The entrance to the garden is free.

Baguio is popularly known for strawberries. However, the most visited strawberry farm is located in La Trinidad which is 30 minutes away from Baguio. You can buy strawberries here, but if you want to experience picking them yourself, you have to pay an additional fee.

This is one of the newest attractions in La Trinidad situated not too far away from the strawberry farm. This cluster of colorful houses on a hillside is a community project formally called the Stobosa Hillside Homes Artwork. Stobosa stands for the names of the three sitios that make up this giant artwork by the designers of Tam-awan Village, Stonehill, Botiwtiw, and Sadjap.

Located just outside The Mansion, Wright Park is a forested area named after Governor-General Luke Edward Wright. There are a number of horses available here if you want to go horseback riding.

The Bell Church is one of the most well-known attractions in the Baguio-La Trinidad area. It is a Chinese Temple located within walking distance from the Stobosa Hillside Artwork. This temple is run and managed by a Filipino-Chinese religious organization established back in 1960 by immigrants from Canton or Guangzhou.

Tam-awan village is a reconstructed traditional Cordilleran village. Set in a forest, it is also called Garden in the Sky. It was established by the Chanum foundation in 1988 using only traditional materials to showcase the craftsmanship and aesthetics of the Cordillera. When you visit the village, you will see Ifugao and Kalinga model houses. The entrance fee costs P60.

A short drive from Baguio’s city center is BenCab Museum which houses the works of Benedicto Reyes Cabrera, a National Artist for visual arts. The museum also displays works of other Filipino contemporary art masters. 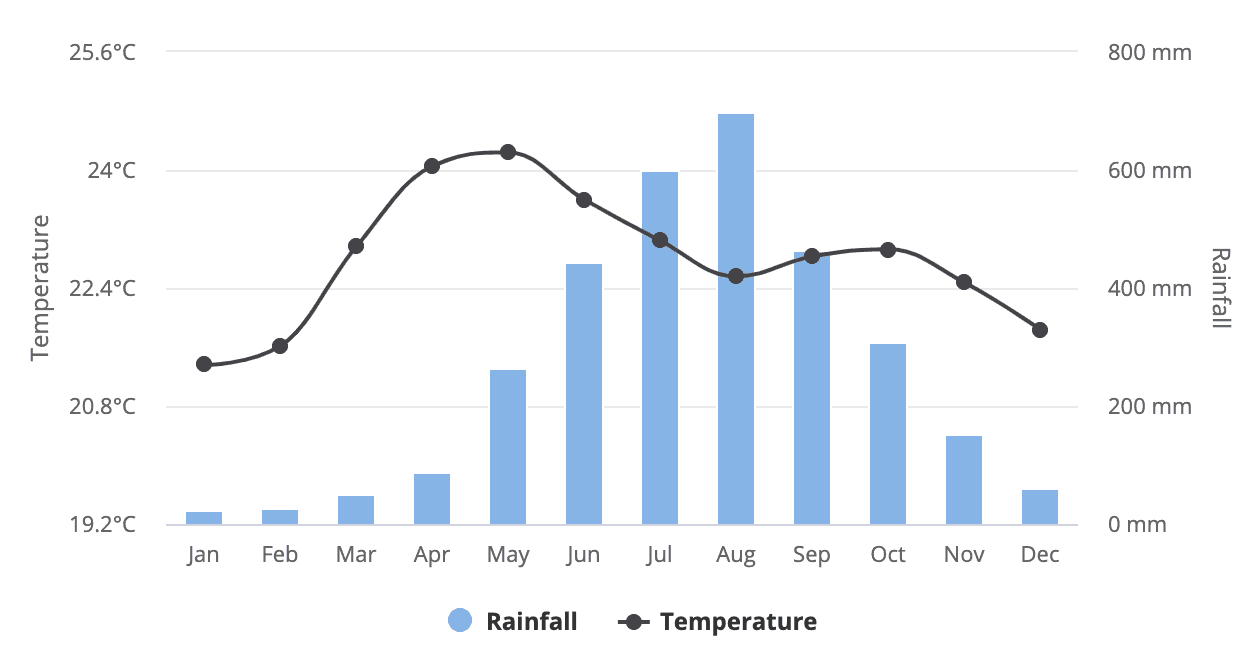 Baguio has a cool temperature year-round, but if you’re planning on visiting various attractions, November to April are the driest months. There’s a low chance of heavy rains which is ideal if you want to explore.

If you want to enjoy the Summer Capital at its coldest, you should visit around December to February. Moreover, if you want to experience the Panagbenga, the Baguio Flower Festival, it happens in February. However, expect that there will be huge crowds during this time.

The rainy period is from June to September. If you don’t have plans to explore but simply want to have time to be alone and reflect, Baguio is still great around this time of the year.

Here’s a sample 3-day itinerary for Baguio. Feel free to make adjustments depending on your preferences.

-Early checkout at the hotel, leave bags
-Pass by Laperal White House
-Botanical Garden
-Wright Park
-The Mansion
-Lunch
-Pick up bags at the hotel
-Travel back to Manila