Nothing is more convincing in making a person feel for the environment than to let him or her see firsthand the extent of destruction that man has inflicted on it. It was something that we realized immediately upon setting foot on Freedom Island, also known as the Las Pinas-Paranaque Critical Habitat and Ecotourism Area.

As the last remaining mangrove forest and salt marsh frontier in Metro Manila,  it serves as a sanctuary for many marine lifeforms and more than 80 species of endemic and migratory birds. What’s even more depressing is that it faces threats of reclamation and pollution. The trash that the metro produces find their way to the shores of Freedom Island, endangering its ecosystems and the livelihood of fisherfolk depending on it. 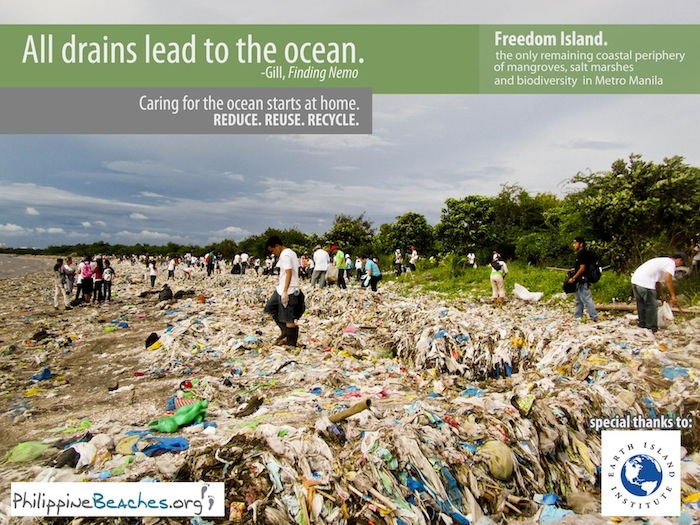 In observance of the World Oceans Day, a cleanup drive was initiated by Earth Island Institute Philippines in the area on June 8, 2013. Environmental activists and volunteers worked together to somehow bring back the beauty of the island. It wasn’t long until we noticed a trend as we raked and scooped out the mounds of garbage from the sea and segregated them according to the type of material. Many of us agreed that the most common types of trash that we collected were sachets, straws, and plastic bags, all pointing at two things: (1) the lack of proper solid waste management system in the city, and (2) the unnecessarily wasteful lifestyles of its inhabitants.

Lifestyle, yes. Our simple habits and choices contribute so much to the destruction of our environment, especially our seas. So here’s a list of eight simple ways to help turn things around and back to what it should be.

By the end of the cleanup, dozens of sacks, all brimming with trash, were picked up by the trucks. More than half of them — plastic bags. These thin, light plastic containers look harmless but they all wreak havoc when not disposed of properly. They clog the drains, block the waterways, cause massive floods, and when they reach the sea, they smother and choke animals to death. Ocean debris kills over 1 million sea birds and 100,000 mammals world wide annually.

So please, drop the plastic bag and pick up a reusable tote instead. They look more fashionable, too!

Sachets are awfully convenient. They are. We have relied heavily on anything single-serving because either they are more affordable or we’re too lazy to have it any other way or both. Everything is available in sachets these days — shampoo, toothpaste, soap, lotion, candies. Heck, even sisig and adobo are packed now in sachets! Yes, they are convenient but at what cost?

First, you may not realize it but preferring sachets can actually result in higher cost. Do the math next time you make a trip to the supermarket and you’ll realize you will save more money and energy if you buy in bulk.

Buying in bulk means reduced cost, reduced effort, and reduced packaging that leads to less waste! Should you need anything liquid in small doses, just invest in a small container than can be easily refilled.

Don’t suck! You don’t need a straw to drink. Think about it.

Unless you really, really have to. But the better option would be to just use those tumblers with a built in straw. At least they’re usable. You’ll be surprised just how much straws we gathered during the few hours we stayed at Freedom Island.

We say this over and over again but we’ll never get tired of it — REUSE. Always go for the reusable option. Always carry a tumbler with you so you don’t need to buy something in a plastic bottle again. Opt with reusable containers and utensils and stop buying disposable versions of them. It takes more effort but they are more eco-friendly.

If you really have to use disposable items for whatever reason, then dispose of them properly. Don’t leave them just anywhere or throw them away mindlessly.

If you care about your skin, you probably apply a generous amount of sunscreen to protect yourself from harmful UV rays from the sun. However, it comes with a price. A study conducted by Archives of Environmental Contamination and Toxicology revealed that most sunscreen products contain chemicals that are harmful to marine life. “One such chemical, oxybenzone, has a toxic effect on young coral, causing endocrine disruption, DNA damage and death. In essence, it poses a major ecological conservation crisis because it prevents new corals from populating an area.” 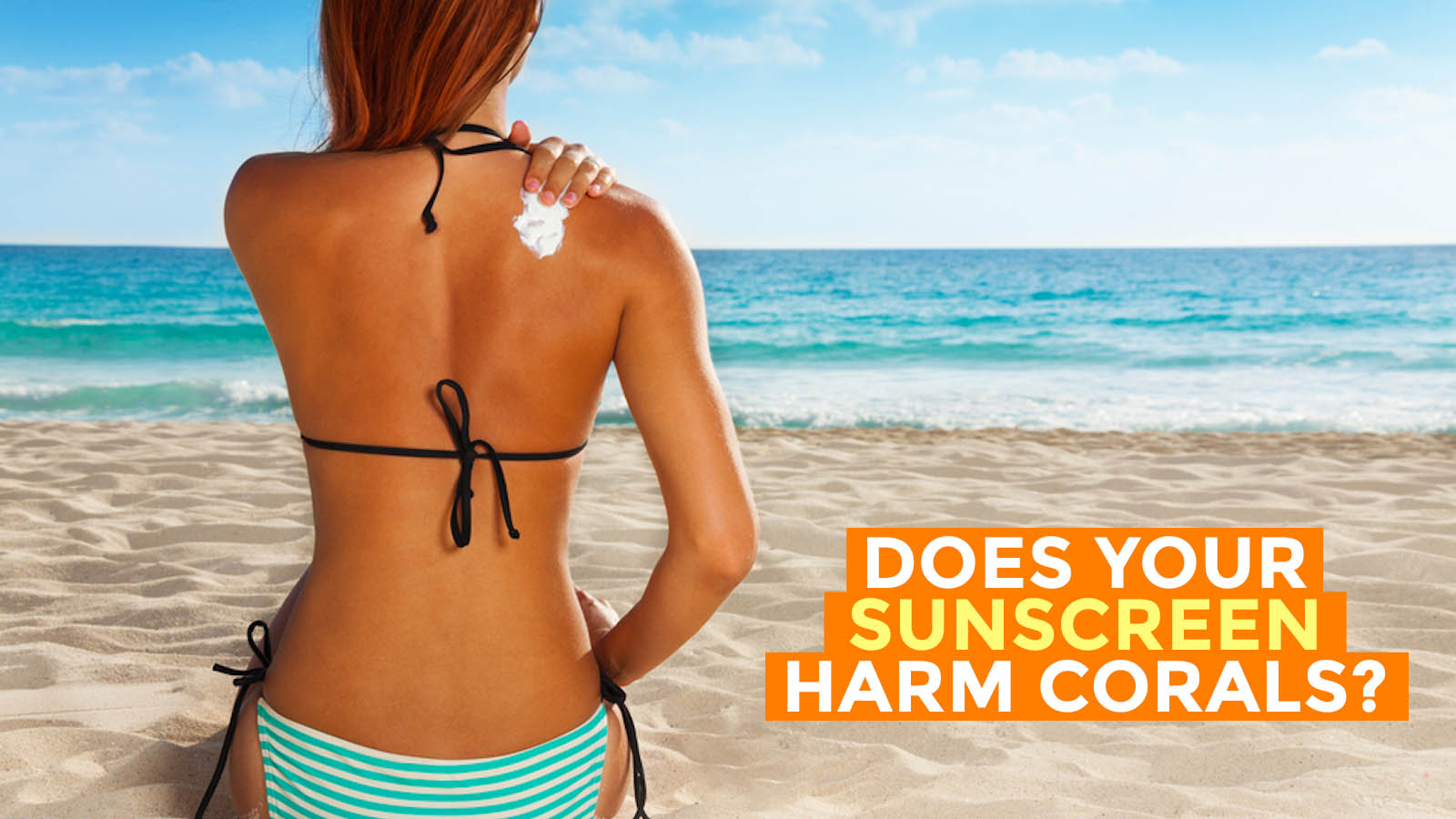 That doesn’t mean that we should ditch sunscreens altogether — our skin still needs protection — but we can choose the products we use. There are brands out there that offer reef-friendly sunscreens, which do not contain the said chemicals. In the Philippines, for example, there is Human Nature.

“What we use on the beach does end up in open water. Over 5,000 metric tons of sunscreen containing coral-bleaching ingredients wash off from swimmers annually,” shares Anna Meloto-Wilk, Co-Founder and President of Human Nature.

If you can go to the gym once a week, you can join a cleanup once a month. It’s a great work out, mind you. The best part is you get to use all your energy for something bigger than yourself.

I have heard many criticisms about cleanups — they don’t work, they say; the trash comes back anyway, they say. Cleanups should not be taken as a physical activity. Angela Colmenares of Earth Island Institute has always referred to it as symbolic. For example, if people see what Freedom Island looks like when it’s not covered in trash, they will know what we’re losing and what we’re fighting for. Also, as Angela puts it, it is a remodeling of the volunteer’s mindset. If you see just how bad the problem has become, you will be more discouraged to waste anything, and compelled to change your lifestyle and spread the word about it.

Do not eat at restaurants serving shark’s fin soup and pawikan soup or whatever goddamn soup that uses protected wildlife as ingredients. You know what they say, when the buying stops, the killing can, too.

Stop going or taking your kids to ocean parks that keep protected animals. See them in the wild; it’s much more rewarding and you can say to your children that their fun was not done at the expense of the environment.

Sharks, manta rays, and marine mammals play a vital role in the ecology. For example, sharks are apex predators and they keep the food chain in check and balance.

The sad reality is, no matter how hard we do our part, nothing is going to happen if our leaders don’t have the political will to make changes to the system. If you’re the type who always cries that the government isn’t doing anything about a problem, then you should ask yourself if you’re doing your part, too. MAKE THEM. Write to them, start a petition, reach out to organizations that they might listen to. Make them realize that we demand change and we demand it from them first.

Encourage family and friends to do the things listed above and ask them to do the same. Talk about it on Twitter, Facebook, and other social media sites. Let everyone know that things can be done to make a difference.

And of course, walk the talk, too!