She will intimidate you. She can and she will. Batanes has that effect on me; maybe I am not alone in this. I used to dream about meeting her someday, wanting to know her more, stripping some of the mystery off of her. But when I finally set foot in Batanes for the first time last May of this year, we clicked instantly. It was like one of those rare moments when I meet someone for the first time, and I knew I’d get along with that person well.

She is a true blue introvert. She can be so warm and welcoming whenever she wants to, but she can also be cold the next. But her introversion is what drew me to her. She has character, so peculiar yet so charming. While most of her colleagues vie for attention, Batanes stays unruffled, minding her own business. And unlike them, she gets her energy from within, not seeking validation from others. She dared to be different.

Here are some of the things that make Batanes unique and set her apart from the rest.

The Ivatan’s vakul and talugong are headgears made from vuyavuy palm’s abaca fiber. The women wear the vakul, while the men wear the talugong. These headgears are unique to the Ivatan culture. They are designed to protect the wearers from the sun and the rain. They work both ways: keeping the wearer warm during the cold days and cool during the hot days.

The sea has a huge impact on the Ivatan’s way of living. They rely greatly on fishing for their livelihood because farming is quite challenging because of the disruptions caused by the frequent harsh weather. Caught between the two great bodies of water — the South China Sea and the Pacific Ocean, the Ivatans are no stranger to strong waves and currents.

The tataya is an oar-driven fishing boat without outrigger (katig), designed to withstand the mighty currents when fishing. It can usually seat two to three persons. The faluwa works the same way but it is bigger and serves as a passenger boat that can seat 20-30 people.

The Ivatan culture is largely influenced by the climate, and one such outcome of this is the stone house. The walls of these stone houses are made of meter-thick limestones and corals, while the roof is made of thick layers of cogon grass (also cogongrass). There are actually three types of traditional houses in Batanes: maytuab, sinadumparan, and jinin. Only two of them have walls made of stones and corals — maytuab and sinadumparan. Jinin is made of wood and cogon grass. The only difference between maytuab and sinadumparan is the roof. Both are made of cogon crass, but maytuab has four slopes, while sinadumparan has two slopes.

Last May, I had the opportunity to learn more about these stone houses as our team joined the Tourism Promotions Board in their corporate social responsibility project. One of the activities was the rehabilitation of a stone house. The property that the TPB funded has separate structures for the kitchen, bathroom, living room, and storeroom. While covering the initial stage of restoration, the locals told us about the very long process of rebuilding the structure wherein members of the community help — from the repairing/construction to the preparation of food for the community.

We started early, painstakingly dismantling the existing old cogon-grass roof with the locals. The rest of the morning was spent clearing and cleaning the area amid the summer heat, but witnessing how everyone is doing his or her part in the stone house rehabilitation project made the challenging task lighter. This Bayanihan-like practice is called kayvayvanaan. The construction or repair, which can take months to complete, is usually done during summer when there’s less chance of rain and typhoon. 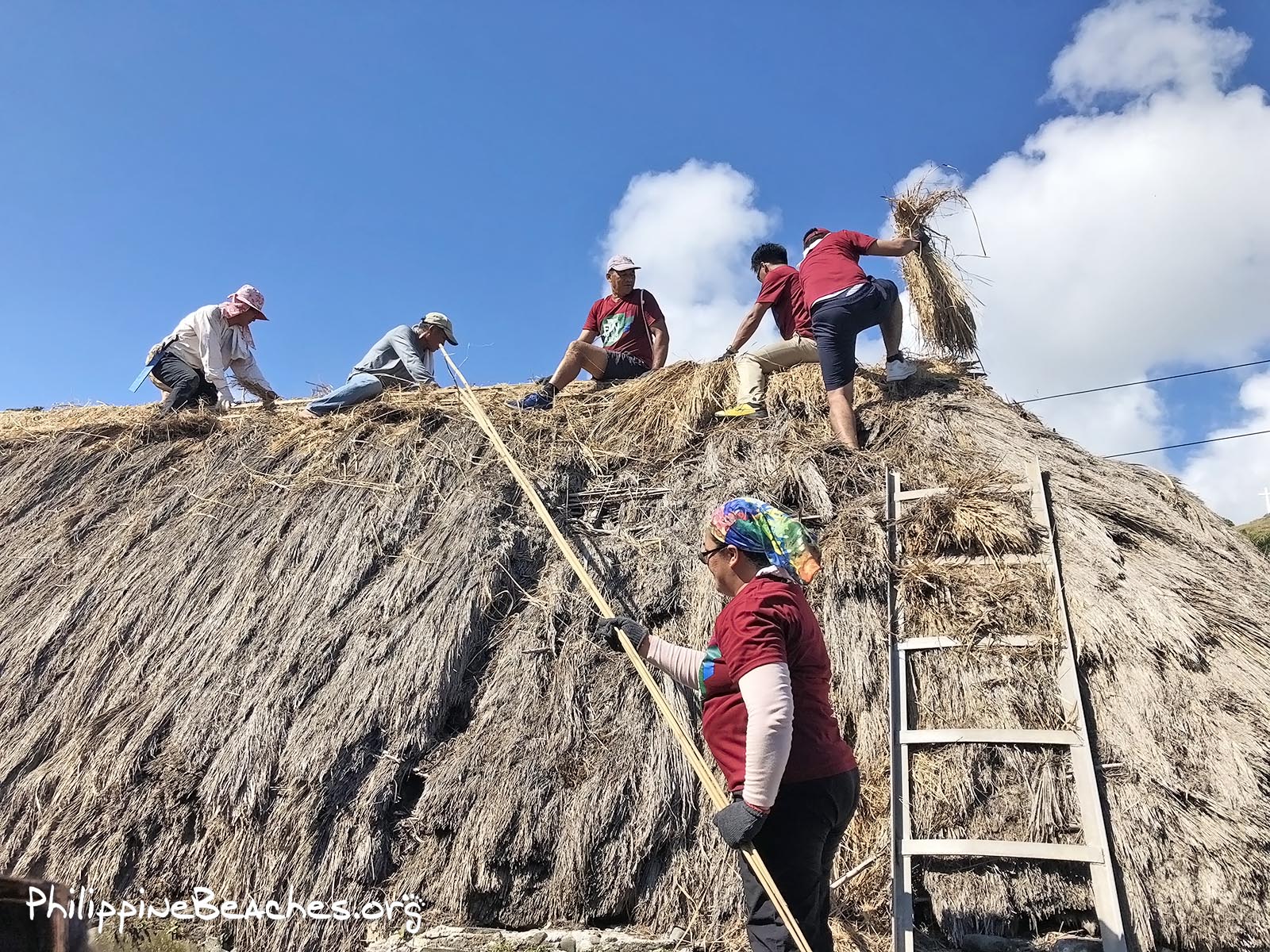 It was a hot day when the TPB team did the stone house restoration, but all was well as the event was punctuated by a sumptuous lunch in breadfruit leaf (also known as Kabaya leaf). I was really amazed at the huge leaf which can be used as a plate, as a takeaway packaging for food/leftovers, as a fan, or as a drinking receptacle. During our stay in Batanes, we ate in these enormous thick Kabaya leaf most of the time. 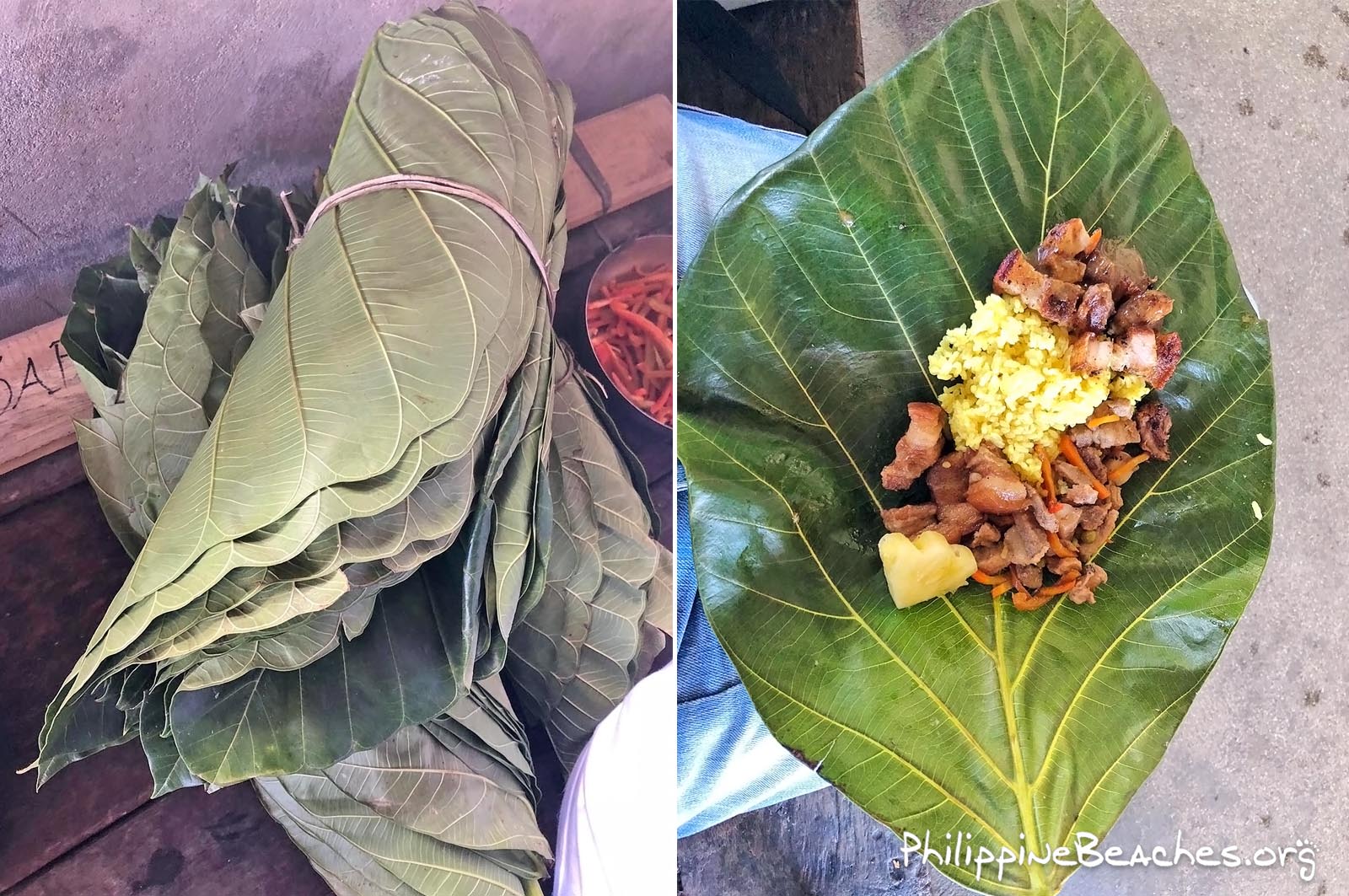 This Ivatan practice of serving food in a breadfruit leaf, especially during fiestas and special gatherings like weddings, is called Kapayvunung. An alternative to paper plates, these leaves are biodegradable, which makes this practice eco-friendly. 🙂 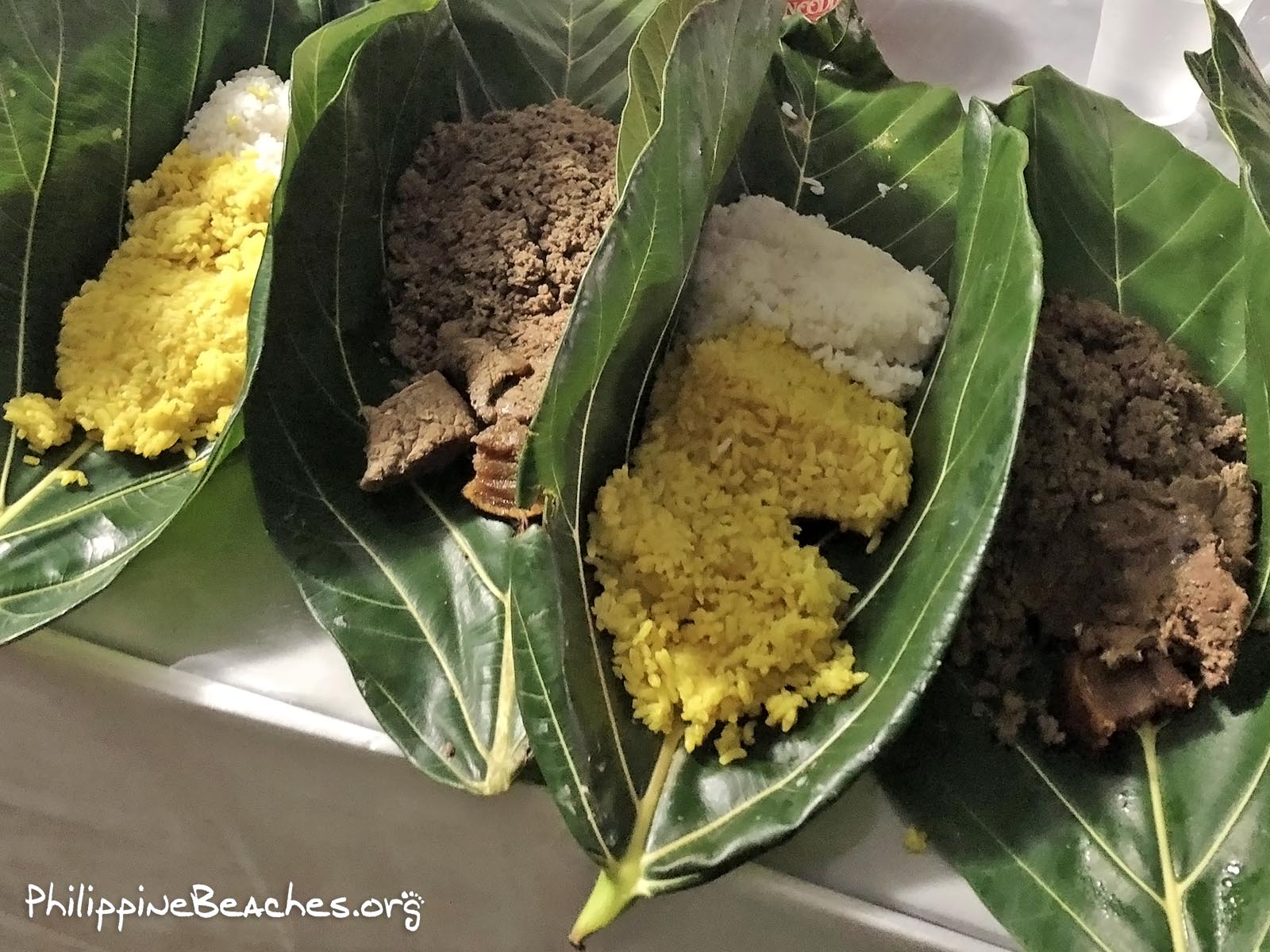 The shores of Batanes abound in dibang (flying fish) and arayu (dolphinfish) during the months of March until May, the fishing season. The Ivatans usually salt and dry them under the sun. During my visit, I was able to eat fried dried dibang for breakfast. 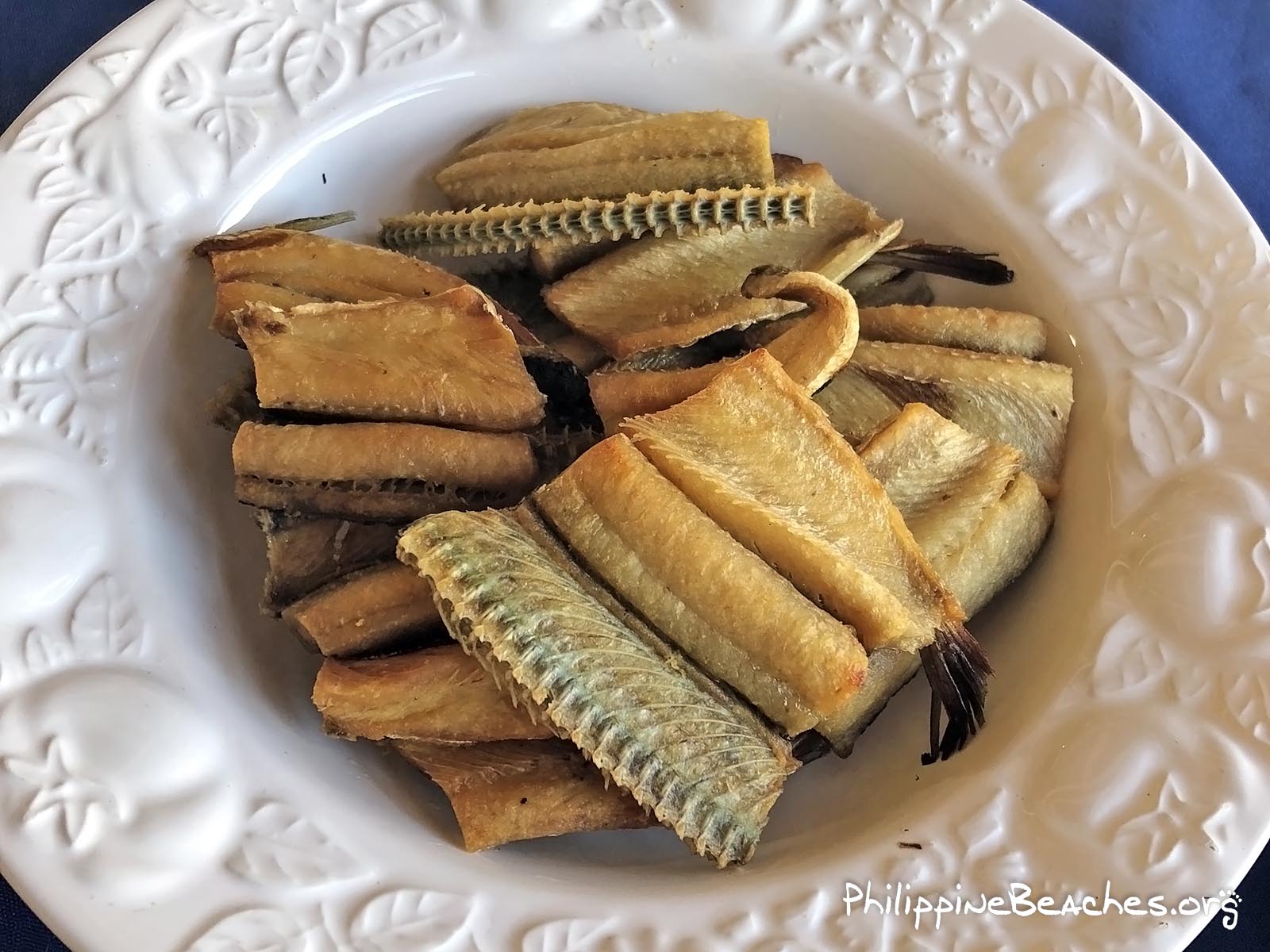 Contrary to popular belief, coconut crabs are not seafood; they actually belong to the arthropod phylum of the animal kingdom; they are the largest in that category. They are named such because they can open coconuts and feed on them. But it’s best not to eat them as they are already considered THREATENED SPECIES; capturing or consuming them is ILLEGAL. But don’t be sad! Lobsters (payi) are abundant and cheap in Batanes and can be a great alternative to coconut crabs. Prior to your visit, you need to contact the restaurant and let them know that you want to include some lobsters in your meal.

The rolling hills of Batanes are mostly decorated with maze-like hedges. These rows, usually made of trees, grass, shrubs, or stone piles, not only form an expansive landscape architecture that is distinctly Ivatan but also protect the crops from the strong winds and help prevents soil erosion.

Where to Stay: Batanes Hotels